The origin of Lake Garda derives from the Glaciations, a long “glacier tongue” of the Sarca River formed this wonderful lake. It is situated only 65m above sea level, bordered by two important mountain ranges: to the east by Monte Baldo, which separates it from the Adige-Valley, to the west by the alps “Prealpi” with its famous peaks “Monte Tremalzo, Monte Carrone and Monte Pizzoccolo”.

Lake Garda is divided into three regions: first there is “Lombardia” with its west-coasts, rich of vegetation, especially of evergreen plants and trees. The region “Veneto” is dominating on the east-coast, rich of Mediterranean vegetation, at least the region “Trentino” by a chain of steep mountains (Monte Baldo and Alpi Ledrensi), giving it a look of a fjord. 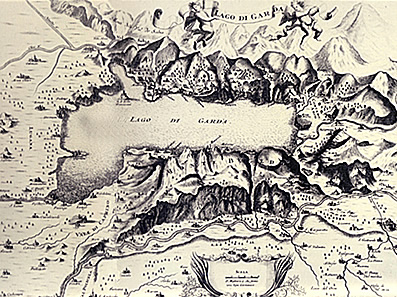 The principle tributary is the river, named Sarca, flowing into Lake Garda between Torbole and Riva starting form Monte Adamello and Lago Nambino. Exiting near Peschiera is the unique river, called Mincio, thanks to him Lake Garda has its wonderful dark blue, clear water. Lake Garda are also added by innumerable underwater-torrents, the famous “Coriffs” underground-waterways, creating several hills and  valleys on the sea-ground. Some characteristic winds, formed by the mountain ranges, are “Sover” or better known as “Maestro”, followed by “Ander”, then the famous “Ora”, not to forget “Vinessa”, at least “Montis” and much more.

The constant mild climate resemble the Mediterranean scenery of the  landscapes. That picturesque imagination will be underlined by the architecture  of the well-preserved historical centres of the towns It is therefore noticeable, that the territory of Lake Garda acquires particular value according to the natural position, which favour a variety of vegetation, especially the growing of olives, wine and citrus fruit.