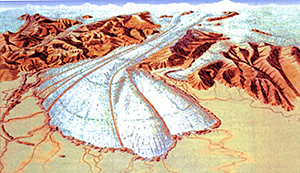 The morphology of Lake Garda evidences the presence of two different basins, separated by  underwater mountains beginning at Sirmione up to San Vigilio. The West-basin, Desenzano-Riva, is the biggest and the deepest one (346 m); the East-basin is more shallow (depth: only 80 m). The rocks, creating the formation of the lake region, developed during the Secondary Ages, about 230 and 70 million years ago, coming up to the surface from the Sea of Tetide, and were then moved towards the North by the continent of Africa. Lake Garda has approximately the same origin like other sub-alpine lakes. Recently connected to the “salinity” crisis of the Messiano – about 6 and 5 million years ago, when the level of the Mediterranean Sea lowered drastically-  deep valleys were formed by the erosion of  powerful Alp-streams, flowing downwards with an incredible strength, dragging along gravel and patches of loose rock.The zone in front of the Alps was covered by lot of valleys,  nowadays Lake Garda, Lago di Como, Lago Maggiore and Lago d’Iseo. 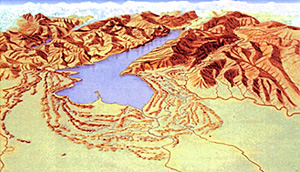 Then it took five quaternary glaciations ( most important was the last one, called  Wuerm) which scoured out, with repeated excavation works, the basin of Lake Garda well over its length to bring in the crumbly rocks of the sinclinale benacense. The large quantity of water, which came out of the glacials, transported so much boulders, powered by big glacial erosions. The ice, with varying advances and with drawls, gave form to  the hills “Colline moreniche”, with a radius of more than 3o km. That was the “BIRTH” of Lake Garda and its territory, about 15.000 years ago.The never-ending processes of erosion influenced the form of the zone, the surface, the heights and the depths of valleys and hills. Most of all is outstanding MONTE BALDO, with innumerable waves and surges, vaults and soles to discover on its territory. Also thermal miracles are not missing in this area – most of all in the region between Peschiera, Sandrà and Sirmione – deep, deep under the earth, it seems like a big magazine of coal. That thermal-air-condition continues creating an intensive air-circulation and this circulation gives the possibility to the thermal fluids, renewing themselves. They are called thermal fountains with a low temperature, (a heat of about 40° Celsius). Only in Sirmione, we have a warmer thermal fountain, named BOIOLA. It comes from the depth of 18m and it has a heat of about 63-65° Celsius. Another thermal fountain was found nearby of Peschiera, Sandrà and Lazise, having a heat of about 20-25°C. till 35-42°Celsius. Only a few years ago the wonderful thermal center “Villa Dei Cedri” came into being.