FROM THE PREHISTORY TO THE ROMAN PERIOD 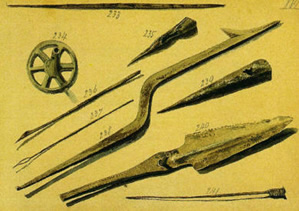 The last Glaciation has removed all traces of Stone Aged humanity. Only a few indications of “human life” were found in the valleys and on the mountains, which were spared by the glacial “tongues”. Here we talk about territories on the Trentino side of Monte Baldo, where stone tools, probably made by huntsmen, could be dug up. The mountains “Monte Baldo” were just populated  in 8.000 – 4.500 a. Cr., during the “MeseolitIc Ages“. They told, that in these zones people settled, because here they could find a lot of stones, the essential basement of their life. During the “Neolitic Epoch” – about 4.000 a. Cr. – the inhabitants of Lake Garda and surroundings formed  the famous vases with the quadrate opening.

From the same epoch they found tombs at Arco, Monte Brione, where the corpses were buried in squatting position. A lot of indications, testifying human life during the Prehistory, were found on the Veronese coast (2.000 a. Cr.). There were constructed  “piles villages”, on of these in POLADA, in the territory “Collline moreniche”, between Desenzano and Lonato.
Very important are the settlements of these piles villages, found in the surroundings of Lake Garda – thanks to the pollen and the remains of that epoch, which remained owing to the dampness, so that we can reduce to the way of life during that time.

They cultivated cereals, peas and fruit, they kept sheep and goats, cows and pork. Their tools let us infer, that these people should be tradesmen. They made all kinds of ceramic objects, metallic-  and stone- tools; a little “industrial society”, producing things of bones, stones and braided or weaved cloths. After the Bronze Ages (1300 – 10100 A. Cr.) the people round Lake Garda manufactured metal objects, “exporting” it in whole Italy up to the continental Europe.

There was, for example a special kind of ash, which was made unambiguously at Peschiera. During the Iron Ages (1000 a. Cr.) the inhabitants of Lake Garda left their piles and settled down on a few strategic places round the lake. During the next time people of the surroundings began to contact the inhabitants near the coast. A few centuries before A.D., there were even seen some Etruscan merchants at Lake Garda.

Then the region was crossed by Gallic tribes, named “Galli Cenomani” (600 a. Cr.). In the Veronese Region some stone-paintings were found, which tell about the way of life, the working and merchandizing of those days.

FROM THE DECAY OF THE ROMAN SUPREMACY TO THE MIDDLE AGES

The Romans occupied the zone about 200 – 100 B.C.. ; big, large streets and ruins of palaces at Desenzano and Sirmione are still testifying that historical event. There are also to see very interesting tomb-inscriptions, found at “Monte di San Marino“, with ruins of a monastery, built up at the time of imperialism. After the Roman Decline, some Barbarian people crossed the territories of the lake. There was a famous meeting, at Salionze di Valeggio, between Pope Leone and King Attila. The fortress of Garda was the residence of Duke Hildebrand, he was the weapon customer of King Theodorich. Then the Longobards settled down nearby Sirmione, but big troops occupied the eastern coasts of Lake Garda, because of its good  military- strategic- points. Here they controlled the lake and all the streets up to Bussolengo, Pastrengo, Cavaion and Calsmasino. During that period olive-culture came into being, even by the behaviour and the trades of the monasteries of Santa Giulia and San Colombano di Bobbio, which cultivated a lot of olive-trees between Garda and Bardolino.

The Longobards reestablished the settlements and inserted Christianity, to remember are some good deeds of St. Vigilio and St. Zeno (400 p. Cr.). The reestablishments were continued by the German King “Carlo Magno“. Lake Garda has many Roman churches of these epoch, like San Michele, San Giorgio, Sant’Andrea and San Martino, based on old temples.

Under the reign of King Berengario of Italy, many towns of Lake Garda built  fortresses and castles, defending themselves against the Hungarian attacks. In those days some fortresses became military-headquarters, for example the fortress “Rocca del Garda“, prison of Queen Adelaide di Borgogna (950 A.D.), widow of King Lothar II and future wife of King Ottone I. Just in that time the name of the town BENACO changed into GARDA.

Only a few years after the first millennium the commander, King Henry founded the town GARDA. It became capital of the eastern coast of Lake Garda, he assigned the political rights to the bishop of Trento, Bishop ULDERICO I. The community of Garda, which was continuously moved by the reign of Verona and the kingdom of Italy, in 1136 rebelled. But just a few times later  the town was occupied by the Bavarian Duke Henry “il Superbo”, for 20 long years, then it turned to the reign of Verona. On Lake Garda reigned the Veronese Duke Turisendo. Ottone di Frisinga, mentioned for the first time in a battle- report the town Garda, “stagnum Gardae”. In 1193 reigned Henry VI., he wasted money for the conquest of Sicilia. He sold the fortress “Rocca di Garda” for 1000 silver coins. Four years later Verona enlarged its legal rights up to Sirmione. The western coast was reigned by the city of Brescia, it became independent and named itself proudly “La costa occidentale del Garda“. During the 12th. century most of the towns round Lake Garda became independent, they were free communes. The rights of fishing, the use of the territories and the forests round Lake Garda were founded, a big part of these rules even nowadays have legality. Good economical relationships, and a  feeling of “belonging together” made, that a lot of communities of Lake Garda developed the first trade centres. In 1265 Riva was occupied by the titled family “I signori d’Arco“, but only 14 years later it was reigned by the bishop of Trento.

In the 13th. century ruled the “Scaligeri“, in those days many castles and fortresses were fortified. Among these, two of the most famous defence points were the fortresses of Malcesine and Riva, especially under the reign of the titled family “della Scala”. The middle part of the coast had lot of ports, underlining Torri del Benaco and Lazise, where the ports protected the ships, completed with weapons. In the second part of the 13th. century the fortress of Sirmione (this establishment exists just nowadays) was fortified, while in the surroundings they built up other castles up to the frontiers of Mantova, at Ponti, at Monzambano and at Valeggio, it became a real fortress system, the only one in Italy. It was named “Serraglio” an uninterrupted chain of castles, fortresses and Towers, connected with high walls up to the fortress of Villafranca. At the same time the Bresciana coast was occupied by the titled family “I Visconti”, who, in 1387, conquered also the other side of Lake Garda.

FROM THE REPUBLIC OF VENICE “LA SERENISSIMA” TILL TODAY 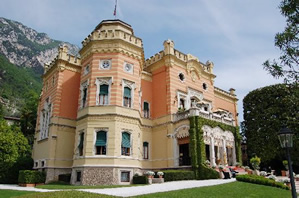 After the death of Giangaleazzo, for a short period the “Scaligeri” reigned this territories, followed by the titled family “Cararesi of Padova”, at least, in 1405 Lake Garda, except for Riva, took part of the “Repubblica di Venezia“. The long supremacy of the “Repubblica di Venezia“, left essential traces at Lake Garda, a good value of the agriculture,  specific constructions of towns  with a great part of parks and gardens, laid out with characteristic plants and trees, especially cypresses. Nearby the towns of Lake Garda there grew only a few grain, trading point was Desenzano. But there were so many lemon – trees on the hills. In the surroundings of the lake there were farmers, in the forests they picked up the wood. The fishing was intensively done and fish – trading, too. A certain “industrialisation” was to find in the towns round the lake, they produced linen, thread and cords at Salò, nails at Campione and paper at Toscolano, while they made all kind of iron tools, like ashes and knives in the valley, called “Val Sabbia“.

On the Westside, in 1588 Salò became the headquarters of the famous “Magnifica Patria“, a coalition, which united all the communities of the Bresiciana region. On the other side of the lake, in the 14th. century they founded the institution “Gardasana dell’Acqua“, a federation especially for tax purposes.: very famous was Malcesine, followed by Torri del Benaco, the captains-headquarters. But Sirmione and Peschiera were reigned still by Verona. The administration of the region of Verona was still made by the “Repubblica di Venezia”, which allocated the singular tasks at several bishops. During the war between Venezia and “Lega di Cambrai” (in 1508), the Garedsana Region was attacked seriously by the French king, then followed a terrible battle against the commander Massimiliano, who finally was able to conquer the whole territory, but only for a short time, because in 1521 the higher part of the Lake was occupied again by the bishop of Trento. In the 15th and the 15th. century there was the plague and about 50% of the inhabitants died (1630). Our landscapes were included in all battles of Napoleon, the most famous battle was at Rivoli Veronese, in January 1797, a great victory for the French general, other little battles were done in the surroundings of Lake Garda. At 17th. of October 1797 there was the “Trattato di Campoformio” and the northern side of the lake had the frontier at Campione and the whole East side was under the supremacy of Austria, except Lazise and Peschiera, which took part of the region “Cisalpina”. Riva remained under the rule of the bishop of Trento. In 1815 Lake Garda was reigned by the German titled family “Hapsburgers” and took part of the “Regione Lombardo-Veneto“. In the middle of the 19th. century the southern part of Lake Garda became scenery of the Italian Independent Wars. First, in 1859 the “Regione Lombarda” was assigned at Italy, followed by the Veronese Region, in 1866, then the Trentino Region and at least the whole Lake Garda took part of Italy (in 1918).

After the liberation of Mussolini dal Gran Sasso, the adventurous period of socialism began. Capital was Salò, and the “Duce“, at the 10th. of October came to Gargnano for living at Lake Garda., in the palace “Villa Feltrinelli”. Between “Val Sabbia” and Monte Baldo  was the reign of partisans, also in some parts of the Trentino Region, at Riva was a famous battle, at 28th. of April 1945. The great emigration of Lake Garda began about the end of the 18th. century, when a lot of farmers decided to go to “New-England” into the forests, to work like woodcutters.

Other signs of emigration were seen during the economical crises between the two World Wars. The first destination was Argentina, followed later by the mines of Belge and the manufactures of Switzerland. After the Second World War began the real explosion of tourism. Masses of foreigners came to Lake Garda, an event, which changed many things in our region, giving to the towns a great economical recovery. The agriculture was quasi eliminated, the olive oil-culture decreased and today you can find farmers only in the regions of Monte Baldo. Also fishing decreased, because  the “new life” offered better financial conditions.Today Lake Garda, with its hotels and residences, operates exclusively with TOURISM.